The Ultimate In Quality !!! - KTS - Made in Italy
Distributed by CD MUSIC Co srl. - Italy

Liner includes a copy of the KTS catalog.

There seems to be some confusion, and possibly a misprint, as to exactly when tracks 8-11 were recorded. Here is what I dug up on http://janesaddiction.org/tour/show/janes-addiction/1987-07-10/387/
Date: July 10, 1987
Location: The Variety Arts Theatre @ The Variety Arts Center, Los Angeles, CA

The first 4 songs of this show have been released on silver bootleg CDs, such as Abdication and La La Palooza.
This recording, especially the shorter mass-bootlegged version, is often mislabeled as 12/31/87 or 12/31/88.

Tonight local rock fans will be forced to choose among three of the most-talked-about bands to emerge from the Los Angeles club scene in the last few years. First, Jane's Addiction, whose debut album was recently released on Triple X Records, plays a rare acoustic show in the fourth-floor ballroom of the Variety Arts Center, 940 S. Figueroa St., Los Angeles. 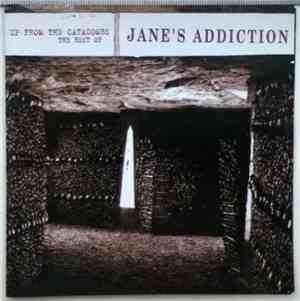 Jane's Addiction - Up From The Catacombs: The Best Of Jane's Addiction - Down In The Flames Jane's Addiction - It's A Jane's World